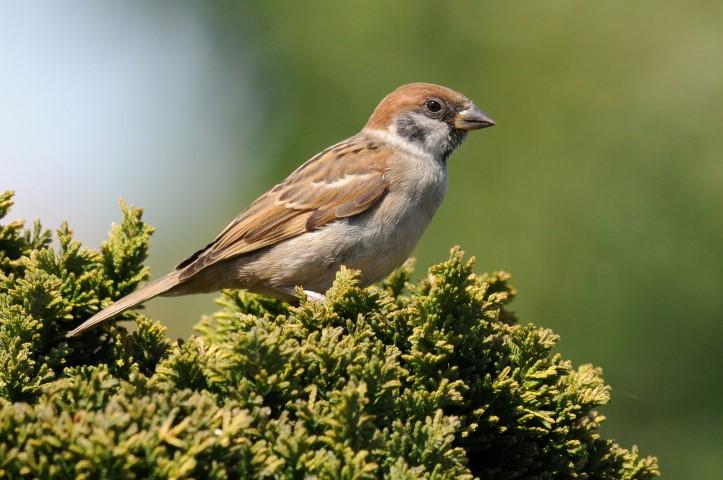 The world changes every day for the worse. Our greed leaves no room for other life forms to cling to the thread of survival. The forests fall silent and so do the cities. I used to boast to foreigners that while their cities were sterile dead things, just full of people, cars and buildings, ours were miracles of nature where mongoose and peacock, sparrow and cow, horse and koels all found the place. But now our cities are becoming as sterile. The cows and horses are gone and one by one the birds disappear.

Three years ago when I lived in Maharani Bagh, the sparrows made my office their home. They built their nests right in front of my desk on the bookshelf. The glass door in summer had to be kept closed because of the air conditioner but every five minutes they tapped to open it to bring in their bits of straw. One person’s job was just to open and close the door. If the door was not opened on time, they sat on the edge of a chair and made such a noise that we rushed to open it.

When we moved here, there were no sparrows and I miss them very much? There is a lot of deep magic in my life and sometimes I can use it. I remember sitting in my son’s room, and saying “Let me see if my wishes still come true. I wish that I could have a sparrow in my room”. I had just completed the sentence when a sparrow flew in, sat for a few minutes and disappeared again. Everyone saw the miracle.

Alas, it was a single sighting. The Chidiya, so common that the name, which once meant sparrow, now means all birds, has become as rare as the vulture. All of a sudden millions of them have disappeared from the planet.

A survey done in Britain by British Trust for Ornithology shows that millions have disappeared there as well – from 25 million they are now less than 10 lakhs. They have disappeared from all of Europe’s main cities. Towns like Amsterdam and Hamburg are now sparrowless. In London, where they flocked to eat crumbs from peoples' hands, there is not a sparrow to be seen today. In big towns, the population went into freefall around 1990, and there is no evidence that it is stabilizing. Questions have been asked in the British Parliament. The British Trust for Ornithology has called thousands of volunteers across the country to report on sparrows over the next 18 months.

In India where data on wildlife is manufactured by bureaucrats during their lunch hour – producing inflated figures even after the species is down to its last few dozen – there is no question of a survey being done on sparrows, but you and I know that they are down to their last lakh or so.

Our houses are constructed to be closed in and so access points are closed up, air conditioners work instead of fans and open windows, feeding the birds has become a thing that the older generation did before the puja, our trees are fruitless Australian ones.

Shrubs give way to lawns and flowers. Chemical usage in the garden increases. Changes in gardens are probably an important reason for their decline. There are fewer weedy corners for birds to feed in, and fewer insects around to feed the chicks. House sparrows rest and hide in old, dense bushes, many of which are disappearing. The key problem lies in a shortage of the tiny insects that fledgling sparrows need during the first three or four days of their lives before they move on to a vegetation diet. Seed eating bird chicks depend on soft-bodied insects like crane flies (‘daddy long-legs’), beetles, caterpillars, aphids and ants and the newborn eat as much as three times their own weight in a 24-hour period during the early stages of growth. So obviously a tremendous quantity of insects is required to raise a family. Apart from chemicals that suppress insect populations, Insects need to eat as well and if you don’t allow your garden to feed them, they disappear too. So with no food and no homes, the sparrow has made a quiet exit from our lives.

Do you want to save the city sparrow? Sparrows avoid living in the same tree canopy with other birds like crows, mynahs and parakeets. They try to find trees, thick bushes or wall cavities that are close to their feeding zones.

Below are some easy ways you can help even if you live in a flat:

Put small trees with thick foliage, bushes with berries and climbers around your house, school or office. Do not trim them. The kikar tree, which is now disappearing, was a roosting site. The loss of a tree means the loss of the sparrow. Put artificial birdhouses in a shady area or in your terrace. This is what they should look like:

Nest boxes should be securely at least 3m above ground level. Avoid the direct heat of the sun. House sparrows breed in loose colonies, so put up several boxes a few feet apart. Boxes should be wooden with a 32mm diameter entrance hole. The box itself should be about 30cm tall and 15cm deep. You can help supply nesting material to house sparrows by putting out straw, hair, fur from groomed pets, moss raked from the lawn, and non-synthetic fibres. Remember not to disturb birds nesting.

Do not use pesticides in the garden. Until your garden recovers its insects put in small annual plants that have seeds like sunflower geraniums, antirrhinum, stocks which also feed birds. Weeds are actually plants that grow from seeds brought by the birds so de-weeding the garden just to have some boring uniform artificially put grass drives away the birds. In any case “weeds” are simply beautiful in themselves with shy pink and other flowers and lots of berries. What one person calls a weed, another cultivates as a prized plant. I brought a “weed” back from Shantiniketan once when I saw the birds eating its berries. Today people exclaim over the beauty of the plant. If you are far too “propah” to let the garden get natural plants, leave a small weedy patch in your garden which through winter can also provide food to house sparrows and other birds. Avoid intense mowing; Maintain the grass at a height of between 3cm to 6cm. Besides retaining its ‘green-ness’ for longer during dry spells, this allows grasses and low growing plants to seed; In some parts of the garden, allow grass to grow to a height of 20–30cm. This provides seeds and shelter for grasshoppers, lacewings, caterpillars, and beetles. Put grass cuttings or dry leaves under shrubs and trees. This also encourages insects in Great.

Make a small pond with small plants – it need not even be more than one meter by one meter. These ponds get colonized very fast and insects like midges, dragonflies and damselflies provide food to sparrows. The seeds of the reeds are eaten sparrows during autumn and winter. Put shallow water bowls out daily so that sparrows can bathe and drink. They should be put near bushes that sparrows can hide in if bigger birds come.

Provide additional seed food to help them survive during periods of food shortage. Seed mixes with sunflower, millet, wheat and rice. Bird tables or hanging feeders can be used to feed house sparrows; the bird tables should be close enough to thick, thorny cover to allow birds a quick escape from cats but not close enough to allow cats to pounce straight onto the table.